Posted on December 28, 2013 by Caitlyn McFarland

Remember last year at this time, when everyone was all, “Lolz! Looks like the Mayans were wrong!” Oh, internet.

Speaking of the internet: 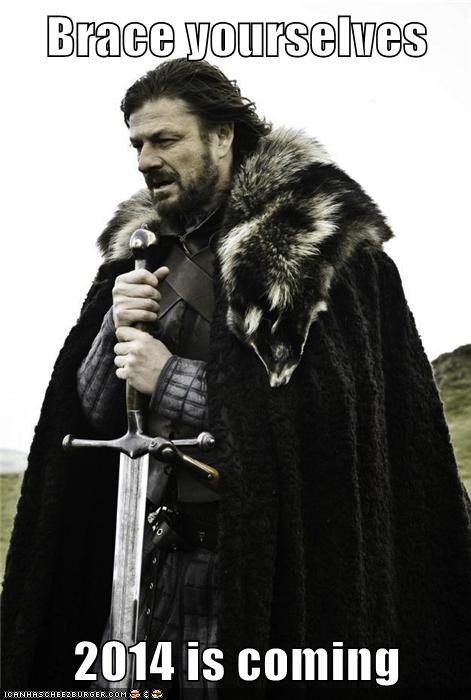 So, New Year’s resolutions. I used to think I needed this big, long list of things about myself to change. However, I’m not that good at life, so two years ago I settled on making three goals/resolutions I am actually capable of achieving within the calendar year.

For 2013 I’m only giving myself 1.5/3. I definitely fulfilled my first goal (begin submitting a novel manuscript to agents), got about half the points in my second one (finish and polish my two WIPs and write a complete first draft of something new), and bombed the third (which, of course, was lose weight). I’m giving myself a little slack on point #2, however, because A) I grossly underestimated how much work goes into a novel after the first draft, and B) I tore apart one of my WIPs and wrote so much new material for it that it basically counts as a new novel. I also won NaNoWriMo, but that novel isn’t complete and every single one of those words is more or less useless. However, those two things combined make it close. Perhaps I give myself 1.75/3.

1. Write a new first draft and polish the one I finished last year.

2. I’m nervous to say this because it’s not entirely in my control, but I want to find an agent this year (fingers crossed).

But I am the special-est snowflake!

3. Instead of saying ‘I want to lose weight’ I’m going to say, ‘I want to transition to a healthier lifestyle.’ Specifically, I’d like to exercise multiple times per week and eat less fast food.

So, that’s me. What about you guys? Care to share goals you’re setting or have achieved?

Mom of three girls, writer of fantasy novels.
View all posts by Caitlyn McFarland →
This entry was posted in Uncategorized and tagged goals, New Years resolutions. Bookmark the permalink.